Some of the Helensvale Daybreak Club (HDB) members went along to assist in the running of the contest. Sarafina Zubovic, area 24 director was one of the judges, Ian Garvie was the MC or contest toastmaster, Julie Anne Cantwell, HDB club president, was tally counter and SAA. I  was timer. 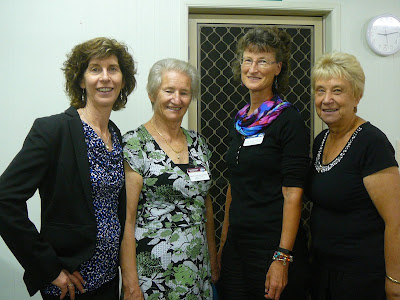 What happens when two TM clubs get together to run an event?
Some people may think it was double trouble or seeing double. Why? There were 2 Ian’s: Ian Garvie and Ian Mc Larren; 2 Ursula’s, both of us assisting as timers for the evening; 2 Julia's (Julia Schafer and Julia Vincent from Nerang TM) and 1 Julie Anne. We could have had 2 Hanna’s too if our membership officer, Hannah Castelijn came along. It may sound confusing, but it just added to the light hearted, enjoyable atmosphere of the evening.


Hannah Mitchell from Robina Sunrise club gave a very inspiring and motivating speech as the test speaker for the Evaluation contest. Well done Hannah!
A very enjoyable evening had by all. Thanks for the Invite Christine.
Also, congratulations  to the place getters from Nerang Toastmasters who will go forward to the next round of the contests to compete with our club's contestants and the other clubs at the Area 24 conference on the 21st October.  See you there! 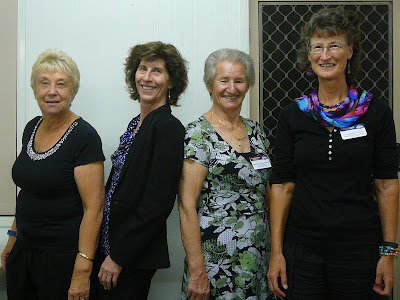 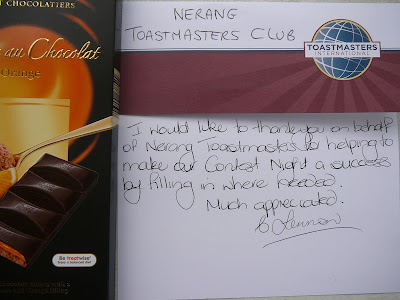 For our assistance running the event, we received a lovely thank you card and  gift – a nice touch of appreciation from the Nerang Toastmasters Club President Christine Lennon.
Posted by Helensvale Daybreak Toast Masters at 8:01 PM