Julie Anne Cantwell began the meeting in a rather unusual way for Toastmasters!  Strumming along with her ukulele, we were treated to a  sing along to the upbeat song: “You are my sunshine, my ray of sunshine…”. What a great way to warm up our voices and lift the energy of the meeting.  Nice one Julie Anne. 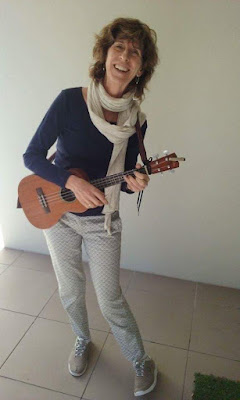 Julie Anne Cantwell: the multi talented singing, ukulele playing toastmaster, and Club president.
Note: This report is on one of our weekly meetings. Most meetings have standard features such as a theme and introduction of members, impromptu speaking segment and 2 prepared speeches, as well as oral and written speech evaluations. The theme for this meeting was Music to my ears, chosen by the Toastmaster for the day:  Julie Anne. It was also her first day as president of the club.


The answers from the different members to the question: “What is your favourite musical piece?” in the “Introduction of members” segment was quite interesting and humorous. For instance, for one member, it was easier to identify the least favoured instrument:  the great big (and beautiful) Cello that is dutifully manoeuvred and ‘squeezed’ into the car, when it’s time for the son’s Cello lessons! What a fabulous instrument for a child to learn to play, even if it is a bit cumbersome.


The Table topics segment, led by Mark Butler and evaluated by Nicole, got the musical stories going.
“Have you ever played a musical instrument?” was the question I was given, which brought me right back to my childhood (which doesn’t seem that long ago!) to the Limerick school of music, where my siblings and I were dragged along to Piano lessons and music theory classes. My mother believed that a child’s education was incomplete unless they learned to play a musical  instrument. Unfortunately, at the time, I didn’t agree! Although I liked playing the Piano (for enjoyment), I disliked the very strict, regimented Piano teacher and the terrifying practical exams: Playing a grand piano up on a huge stage; on my own, watched on by a handful of austere looking examiners, sitting below me in the huge concert hall. No wonder I needed to attend toastmaster’s years later!

Looking back, I was grateful to my parents for the opportunity, especially as we were not well off financially.  I can also agree with the old battle axe of a piano teacher, that I was wasting her time, and my parent’s money with my lack of motivation and regular practice!!

Paul answered the question: “What Instrument would you like to play?” describing the instruments he already plays – the Guitar and Ukulele and then moving on to talk about the keyboard he would like to learn to play.


Ian surprised us all when he was asked to “describe your favourite piece of music” as he started singing Frank Sinatra’s “More…” “More than the greatest love the world has known. This is the love I give to you alone. More than the simple words I try to say. I only live to love you more each day…” ; which he loves to sing to his wife. How sweet is that! Nicole, as the table topics evaluator, was unusually lost for words, not expecting to see this 'softer and romantic' side of Ian!  Well done Ian.
Aimee gave a wonderful speech "Judgement and understanding", about the way we tend to judge people and circumstances without really knowing what is going on for that person. She gave some examples of children behaving badly (her own and then seeing other people with their kids) and the parents not controlling or disciplining them as we think they ‘should’. Often, we just need to appreciate the ‘true’ stories behind the ‘unforgivable’ tantrums and the parents 'inappropriate' response. This speech was evaluated by Ian.


Hanna gave a very informative, well researched  and motivating speech about reducing, reusing and recycling, using excellent props and visual aids. She engaged the audience’s participation at the start of her speech with a quiz to see which “bin” (rubbish bin, Recycle or compost/waste bin) various household and garden items, food and its packaging should go in. I was very happy to evaluate this speech.
Paul gave a general evaluation of the whole meeting and then later, Julie Anne finished this very lively and interesting meeting with another singalong to her ukulele. Thank you Julie Anne, and best wishes with your term  as  club president.