Is it worth giving up part of your  precious weekend time to attend the Club officer training? That is often the question for the various members who sign up for a club officer leadership position.

“It was the best Club officer training I have attended to date.” Sarafina Zubovic, outgoing VPE of Helensvale Daybreak Toastmasters club and incoming Area 24 Director.
"It was great value for money and very worthwhile."- Ursula Beatty, VPPR 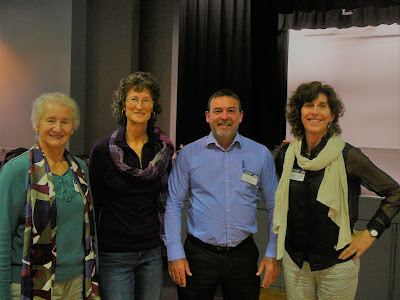 
What I liked about the training: It was great value for money and worthwhile giving up my Saturday  to attend!  For a nominal contribution of $15.00, not only did we receive morning tea and lunch, plus useful training on our specific club officer roles,  we also got to participate in numerous worthwhile workshops facilitated by experienced and highly trained presenters.

The first workshop was on  "Building a healthy team: there is no I in Team!" with exercises to identify whether we, as individuals are multipliers or accidental diminishers. This was facilitated by Carolyn Shaw (based on the highly acclaimed  work and book of Wiseman & McKeon).

The second workshop: Building quality clubs, using the club success plan for the upcoming Toastmaster year, facilitated by Christine Lennon DTM,  was  useful for club teams members to get together, plan and share ideas.

This was followed by a specific workshop for each of the club officer roles.

I attended the (Vice President Membership) VPM and (Vice President Public relations) VPPR training with Rachel Pleasant, who is well qualified in this area, having worked in marketing for more than  20 years, as well as held VPPR and VPM roles in her club: “Southport Toastmasters club.”
After lunch, we had a choice of sessions to attend, on topics such as Conflict resolution, Youth Leadership and Speech craft or Mentoring. Followed by a large group session with Mark Hunter on enhancing evaluations. Giving and receiving effective evaluations is such an integral part of the Toastmasters programs.


I attended an interesting and worthwhile workshop on Conflict resolution: (types of conflict, methods for resolving and facilitating collaboration), facilitated by Shane Cooper, DTM and the head strategy officer for the QLD police service. Shane is  well  qualified and experienced in this field and dealing with conflict resolution.
In the Enhancing Evaluations workshop with Mark Hunter DTM; Mark highlighted the importance of giving feedback Vs Advice: feedback is "In my opinion" or "I would suggest", whereas advice is more like "You should do this or that" etc.  Feedback is coaching, advice is more like telling someone what to do or just criticising.

Mark looked at potential obstacles to giving effective evaluations, and drew from his own vast experience as both a leader and educator, speech coach and Toastmaster speech contestant. He used some wonderful examples of rotten advice and feedback (deflating and demoralising evaluation techniques) which he was given, prior to and after he won the world championship speech contest in 2009. Mark certainly learned firsthand, how not to give an evaluation, which is in itself very useful. 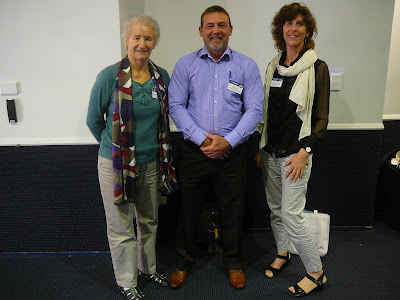 Sarafina Zubovic, Mark Butler and Julie Anne Cantwell all fired up after the training day to face the toastmasters years ahead!

I would certainly recommend the training to all club members, whether they are club officers or not.
Thanks again to all involved in organising this years worthwhile and educational training day and to all of the workshop facilitators and presenters.