"Be the best that you can be": Southern Division Conference & speech contests 2017 - Report by Ursula Beatty VPPR 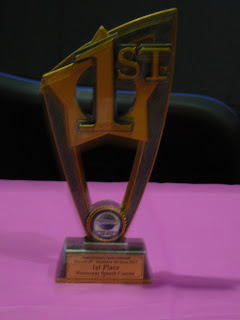 In conjunction with the conference, The third round of the annual speech contests took place at the Bicentennial community centre, Nerang, QLD. on Sat March 18th, 2017

With over 100 in attendance, it was a great success and for our club member Julie Anne Cantwell, it was also a personal success as she brought home the 1st prize trophy for the Humorous contest. Congratulations and very well  done Julie Anne! 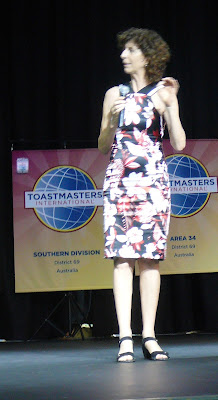 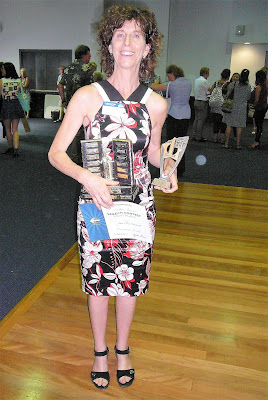 Julie Anne, the  mother of two daughters and  a practicing Naturopath and massage therapist on the Gold Coast,  has only been in our  club for 1 year, so it is a great credit to her. Julie Anne is not shy however, when it comes to performing, as she also sings and plays the guitar in a group called 'The String beans'.

Julie Anne  will now go on to represent the southern division at the 4th round of the contests at the District 69 conference  in Chinchilla. (28th Apr - 1st May) Chinchilla is in Western QLD. 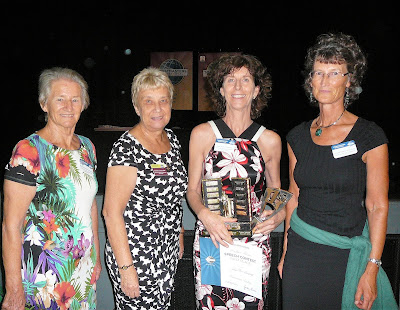 What exactly is the TM Southern Division and how many divisions are there in district 69?
I'm so glad you asked:

What does this mean for the winners of Southern Division? They will be competing against 6  other competitors at  the District 69 conference - round 4 of the speech contests.

As well as the four speech contests, we were treated to an Educational session on the Pathways program by Mark Snow; a key note address by Toastmasters International president Mike Storkey, plus morning tea and lunch. 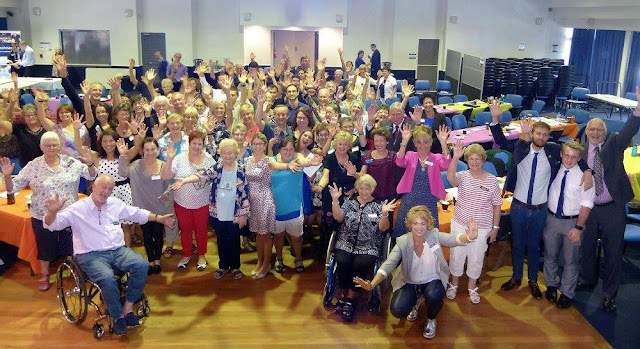 Some of the attendees at the Conference. 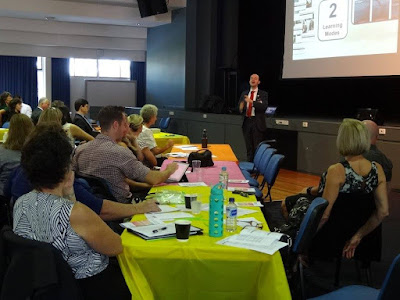 Pathways Program:
Educational speaker Mark Snow DTM, Metro Division Director and Chief Pathways Ambassador gave a very informative and interesting presentation on the new TMI Pathways educational programs which will be rolled out in D69 later this year. I will include a separate blog post on  this program in the coming months. It is certainly new and exciting and promises to bring Toastmasters International communication and leadership programs well and truly into the age of technology while continuing to focus on the traditional forms of communication. 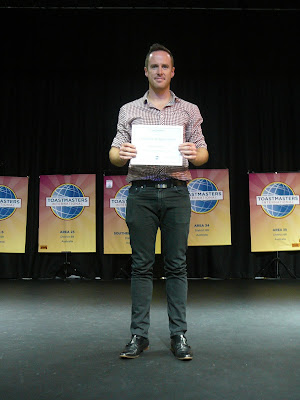 Evaluation Contest
Test speaker: Chad Harding (pictured on right) from Metro Division gave a 7 min speech on 'The information age - are we more connected or disconnected?',  which was later evaluated in a 2-3 min presentation by the 5 contestants (pictured below). 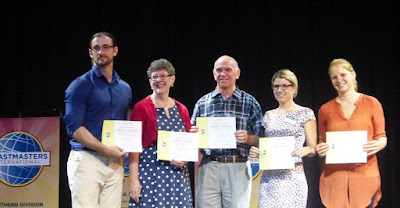 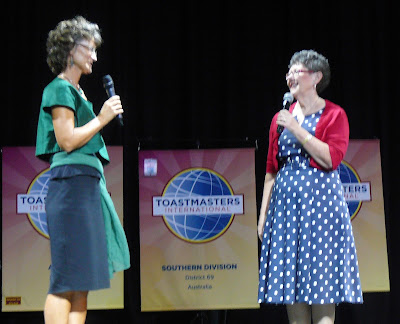 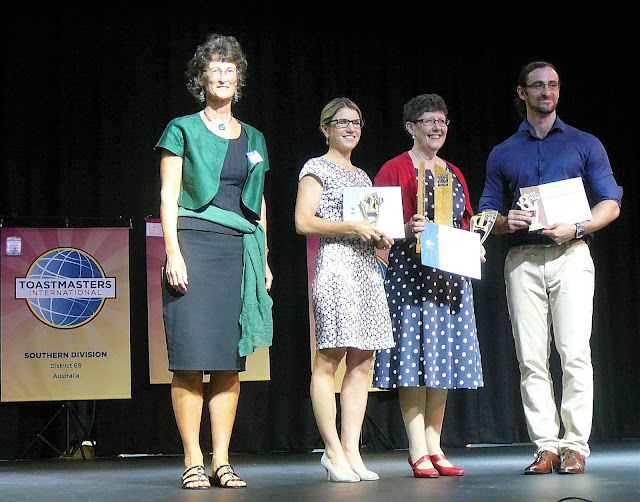 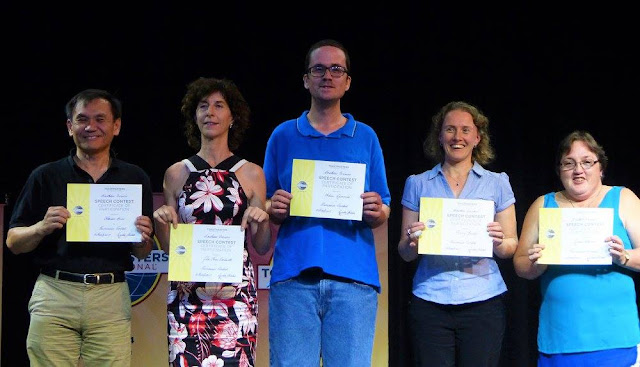 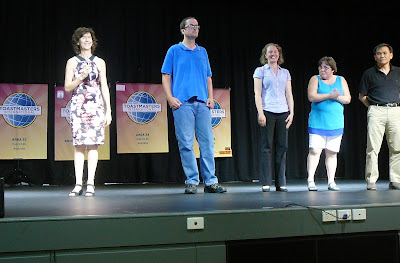 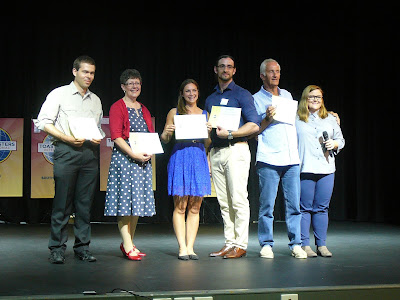 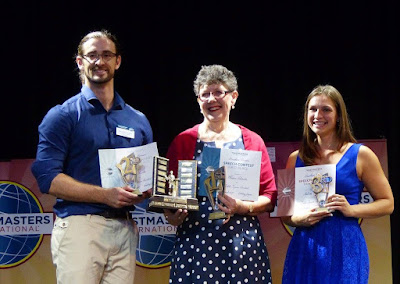 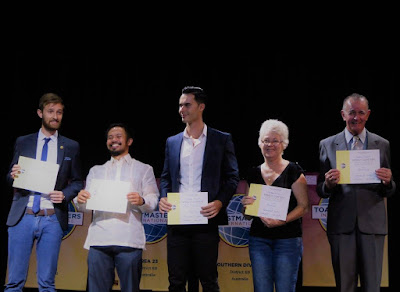 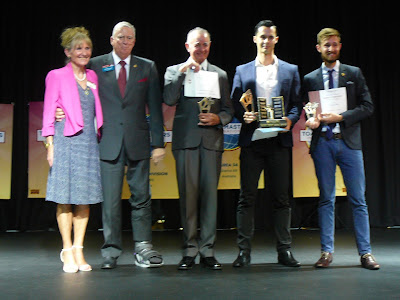 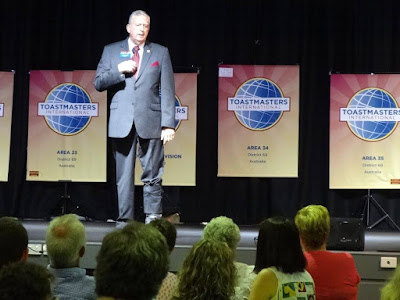 Mike Storkey DTM, 2016-2017 Toastmasters International president,  presents the keynote speech (left) and below with his wife, Leslie Storkey DTM.
Lesley was also one of the judges. 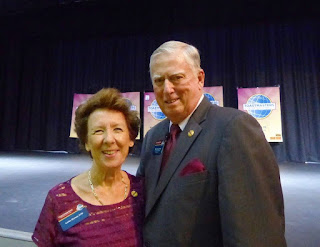 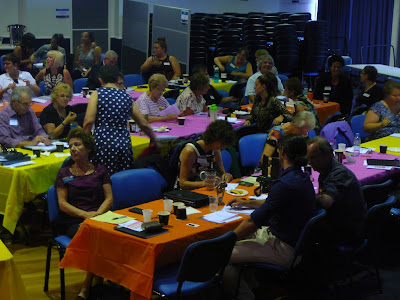 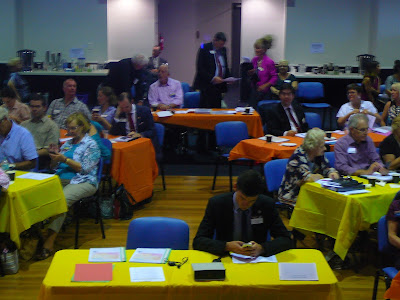 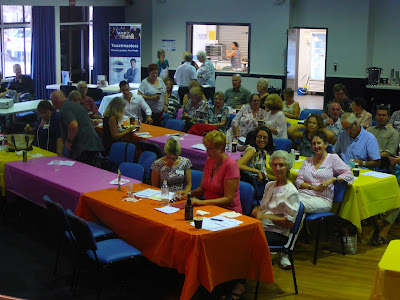 I certainly enjoyed the conference and wish all of the winners from Southern Division ,  especially Julie Anne Cantwell, all the best at the District 69 Conference, for the 4th round of the speech contests.

Can Toastmasters conferences help you to Be the best you can be''? If you would like to comment on this article or  would like to congratulate Julie Anne or one of the other participants? Feel free to click on the comments button to leave your comments below.