Of course, many managers and leaders  join TM for personal growth and to  improve their communication skills. This will  naturally improve their  leadership abilities.

Leadership training is a huge part of the whole TM experience! "Everyone, regardless of their position or role, provides leadership. sometimes that leadership is formal and sometimes it's informal, but we all provide leadership."

Whether its a role in a club meeting such as the Toastmaster (MC), speech evaluator or being part of the executive of the club.

Sometimes, you may volunteer to take on a leadership role  willingly or out of necessity;  at other times,  you may be "voluntold" for  a leadership position with gentle persuasion or direction! I rather like that word, which  I learned while attending the recent leadership training workshop.

Part 2 of the PETs leadership training was held at the Robinson hall, Elanora Uniting church, on 22nd January, 2017.
(PET = President Elect Training designed as preparation for executive members of Toastmasters clubs in district 69, but is now open to any TM club member.)

Note: Part 1 ("leadership essential skills workshop")  was held  in June 2016. four  representatives from our club attended this  informative and instructive session with topics  such as: Creating a vision, strategic planning, building a team, core values, motivating your team and delegation.

Topics in Part 2 (this session) included:  conflict resolution, self awareness as a leader,  purpose and succession planning.
"This session looks at ways to develop your latent skills and give you the opportunity to discover the leader that resides within."

"Effective leaders know that their behaviour is more important than their position or title or even their personality."

Eight of our club members took advantage of this very useful and worthwhile training workshop. (see photo below) 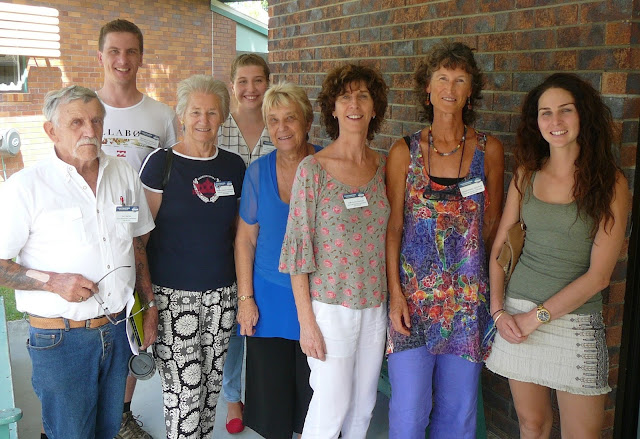 Southern division training officer: Christine Lennon, DTM (Pictured above in blue) who is also our current club president and  immediate past District 69 director.

Christine organised part 1 and part 2 of the leadership training workshops. Together with her husband Murray, they also did the catering, providing a delicious  healthy lunch with lots of salads for all attendees. We were well looked after. Thank you Christine & Murray.

Interesting choice of venue! Toastmasters (TM), as most people know, is not associated with any particular church or religion.
When I arrived, I walked towards a group of people sitting outside, chatting and having morning tea. By the time I realised  it wasn't Toastmasters, an  older man was walking over  to  greet me.
Assuming,  I suppose, that I wished to join  the flock - of the Elanora Uniting church congregation.  Too bad, I had already missed the service!

What have tongue depressors got to do with leadership training? Before the training began, Chris made sure each participant had a large wooden tongue depressor (paddle stick) - you know, the kind a doctor would use, to check your tonsils.

I was very curious to know how this particular 'leadership device' would be used. I had visions of one of the leaders in our club asking a new member to "place the  tongue depressor in your mouth, open wide and say ahh".   then ...

"Ok. [new member] that is  the first and last time you get to say ah or um or any other filler word in our TM club. Is that clear?"
The tongue depressor could perform a type of   'Umahectomy'!! 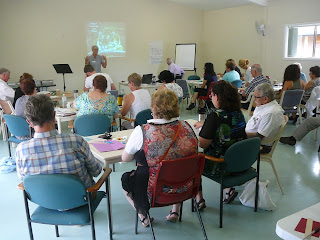 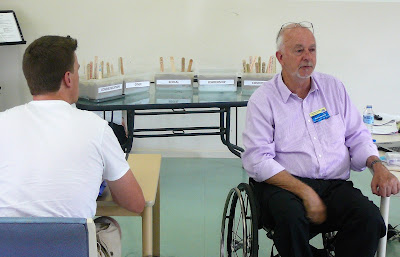 Why do people join Toastmasters?
The Tongue depressor was indeed used as a leadership tool, just not how I imagined - thankfully. Mark asked each of the participants to write on the top end of the stick:  the main reason we joined TM, then place the stick in one of the containers (located on the table, filled with sand). The containers were marked as follows:

What was the end result? 'Confidence' had the most sticks  followed by 'communication'. This result was not surprising. As mentioned earlier,  up until recently, TM was not considered as the 1st place to  go for  'leadership' training or leadership opportunities.

Many long serving TM members may join for one reason, and stay for other reasons such as 'social' or 'service' including leadership within the organisation or the community. TM offers a host of leadership opportunities from club to International level.

"Made in Australia", Toastmasters International President, Mike Storkey DTM  (pictured below) was a special guest together with  his wife, Lesley Storkey DTM and past District 69 director. They both hail from north Queensland,  so it is wonderful to see just how far leadership opportunities can take you in this International organisation. 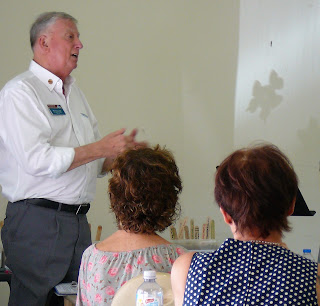 What does Toastmasters contribute to the general community?

One attendee at the training commented "Its easy to see what organisations such as Lyons and Rotary do for the community.
But, what exactly  does TM do for the community?"  Both Marilyn and Mike answered this query very succinctly :
Various Toastmasters give talks to other groups  in the community including rotary etc; Organise and run Speech craft workshops for adults and youth leadership training workshops for people under 18yo.
Most importantly though:
Toastmasters gives individuals a voice, a chance to gain the confidence to speak up and communicate effectively. These skills are  transferred to the home,  the workplace and the greater community.
A huge contribution indeed throughout the whole world, where millions of people participate in TM clubs.

Ian Garvie (on right) gets a grip
on 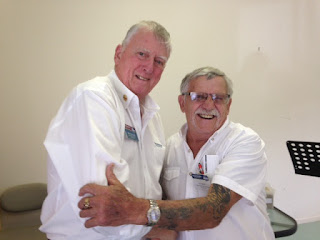 Mike Storkey, (just in case he gets away?) to  secures a 'selfie' with the TMI president himself!!  Nice one Ian! 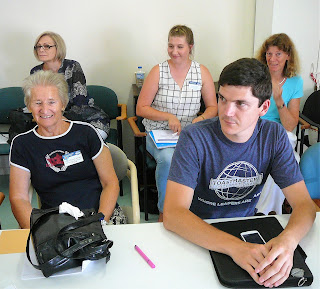 Personal growth with Toastmasters:
I have certainly witnessed huge personal growth in myself and others over the years that I have been a member of Toastmasters.
In addition to becoming a more confident communicator, the various leadership roles that I have taken on, have been empowering and mutually beneficial for me and for the club.
When I can look at any of the leadership roles I take on as an opportunity for growth, rather than a drudge, it  makes the whole process much easier and less stressful. I prefer to be a volunteer than a 'voluntold', though gentle persuasion is fine!.

To lead or not to lead, that is the question...
It is preferable to take on a role  willingly rather than with resistance or resentment. If you really cannot take on a leadership role when asked, due to other commitments, then it is probably best to say  'no' with good clear boundaries. After all, when you say 'yes' to someone, who are you saying 'no' to?
Most people generally respect someone with good clear boundaries.

If on the other hand, if you are reluctant to take on a leadership role due to self doubt or fear, then TM gives you the training, the support and the people who want to see you succeed and become the leader that you know you can be.
That is where training such as these workshops are invaluable. After all , Toastmasters is where leaders are made - and that includes you! 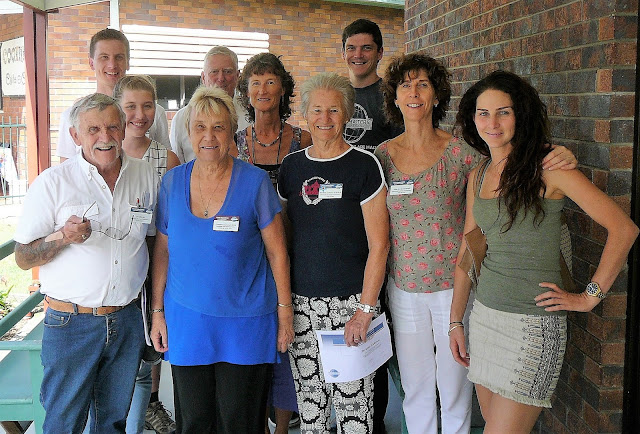 Posted by Helensvale Daybreak Toast Masters at 2:12 PM No comments: