These Toastmasters went on to the Area Conference held on 17th Nov and were placed as follows:

Posted by Helensvale Daybreak Toast Masters at 1:28 PM No comments:

The innocence of our ignorance
﻿

Coming from someone who base jumps, skydives and drives a super bike – and has appeared in television commercials with the title of "Eddy Gaiao – The Extremist", I probably should have known I was in for a little more than just your average adventure when my husband suggested it to me.

Ladies and gentlemen, I am sure that at some point you have had an experience where you look back and think – If I had known everything I know now about this – there is no way that I would have done it. Right?

When Eddy launched his adventure plan to me I had very little climbing experience.

“There is this place in the Namibian desert where there are these picturesque giant granite domes that rise from the desert and they make for the most epic climbing – we can drive up there – camp at the base of the mountain and spend our days exploring.  Do you wanna go?”

After two days of relatively easy climbing - came the suggestion – "Let’s do the summit."
I was game – sure why not – I mean nothing here is that high anyway – how hard could it possibly be?

Maybe the 5am start should have been some kind of indicator.

A flag should surely have been raised when one hour into the summit climb  we were already getting lost – unable to interpret what seemed to be a really simple and straight-forward climbing route guide.

Then there was the section where I was pulling from one end and Eddy was shoving from the other end to SQUEEZE our slightly larger friend through an extremely narrow tunnel.

Just after midday – feeling drained – I was like a child on the back seat of a car on the way to a family vacation – “Are we nearly there yet?” 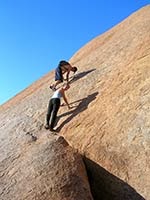 According to the route guide - Eddy assured us that we were almost there – one last pitch to the summit.

“Great I thought – I will just sit down and take a rest while I let the boys climb up this last piece.

It wasn’t until I stood up to do the climb that I realised how exposed it was – and my brain when into lock down – freeze mode.  I tried numerous times to ascend the climb – but I just could not do it.  I began to panic – my heart racing – I was never going to get up here.  I broke down – sobbing – a mixture of fear, anger, distress, panic.  “I just can’t do this – I am never going to get out of here!”

Enter my knight in shining armour – minus the white horse of course - because we were on top of a mountain after all.  Eddy came to my rescue – and essentially took some massive safety risks to pull me up the climb.

When I got to the top I was fully expecting to see the summit but instead I was greeted with the words – it’s only a little more to go and we are at the top.

I put on my full force stubborn mode – that is it!  I have had enough – no more - I don’t want to do anymore.

Eddy once again turned on his convincing powers and tried desperately to assure me that it was literally only a few more steps and we would be at the summit.

I sat down – unsure of how I should feel, and that is when the flood gates opened – I sobbed and sobbed – I wasn’t sure if I should be sad, or happy or angry or elated.

When I looked up Paul was crying to –

And Eddy – was looking at both of us and laughing.

Within what seemed like minutes – Eddy was rushing us – he had a sense of urgency in his voice – we are only half way – we still need to get off this mountain – we need to get going.

Our trusted route guide still had some interesting things planned for us.

As we all abseiled off the first piece – we found ourselves on a ½ meter wide ledge with no anchors or chains – no way to get off – stranded on a sheer vertical cliff.  I did not want to spend the night up here – but what were we going to do – how were we going to get off here?

And then we say it a small tree – that looked more like a bonsai – with aged ropes and slings wrapped around it – we were not the first to make this mistake.  We would have no choice but to trust that this bonsai's roots were strong enough to hold and use it as an anchor point to get off.

The silence in the air was deafening as we held our breath slowly easing ourselves down the rope – eyes glued to the bonsai.  Hoping not to see the sight of the bonsai and its roots following us down the vertical cliff. Thankfully we all made it off the ledge safely.

The next few hours were a race against time – we had to get out of here before the sun went down.
Abseil after abseil we descended – and once we reached the boulders I began blazing a trail – a renewed burst of energy entering into my system – with the end in my sights.

I don’t think that I have ever tackled something this mentally and physically challenging since and while it was one of the toughest things that I have ever done, it is something that I will treasure forever. The energy of this place will be forever etched into my soul – into my being.  I will always be grateful for Eddy’s adventurous spirit – for taking me on this adventure.

After all - I got to write my name in the summit book – only just over 400 people had embarked on this mission before me!

In this instance – I will be forever grateful for the innocence of my ignorance for if I had known what I was getting myself into there is no way that I would have done it.
Posted by Helensvale Daybreak Toast Masters at 5:51 AM No comments: