Sparkle In The West 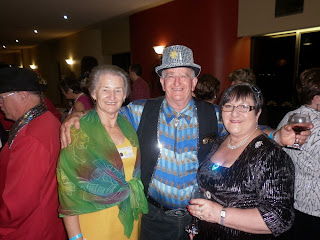 Inverell was ‘cut & polished’ for the District Convention and truly presented itself as a Jewell in the West.


I travelled from the Gold Coast to Lismore to meet the ‘Fun Bus’ with 17 other intrepid travellers. The four hour journey to Inverell was shortened with songs to gladden the heart, a quiz to question your mind and companionship to lift the spirit.
At the Art Centre, we were welcomed with drinks and nibbles and entertained with a taste of Operatic excellence (a forerunner to Opera in the Paddock in March 2012). This was an opportunity for seasoned Toastmasters to catch up with old friends, compare experiences, make new friendships and network. All of which enhance, re-enforce and contribute to the valuable facets of the Conference.
At registration I was awarded a ribbon acknowledging me as a First Timer. Seasoned Conference Toastmasters recognised my status and incorporated me into conversations and discussions at every level. Their friendliness and openness allowed me to relax and ask questions about events and procedures unfamiliar to me. It reminded me of a jigsaw puzzle.
When I first joined Toastmasters, I had the corner stones and borders of the puzzle, ie: the corner stones were my CC & CL Manual to help with my speeches, and the Executive roles ie: President, Secretary, Treasurer etc. Then I entered competitions and attended my first Club Conference, these joined the borders and started adding to the picture with a little more knowledge of judging and a wider knowledge of Timer, Sgt at Arms & Tally Counter roles. I subsequently attended the Area Contest followed by the Southern Division Conference, where I was exposed to other clubs in my area, officialdignitaries and formal executive meetings. More of the puzzle was filled in. By the time I attended the District Convention; I was rubbing shoulders and liaising with Current Governors of Northern, Western, Central, Eastern and Southern Division as well as Governors from outside Division 69. Lobbying, voting and elections became part of the excitement. All in all, an exciting and exhilarating time. Suddenly the last pieces of the puzzle slipped into place and I started to see the picture in its entirety. It’s as if I had been presented with new eyes and the image was impressive.
The quality and excellence of the speakers in each contest has forced me to re-assess my own speeches and delivery. They were all of such a high standard and substance that I was grateful not having had to judge them. To me, it appeared to be an impossible task to pick a winner.
My head is still reeling from the exhilarating experience of my first Division Convention and I can’t wait for 2012 to attend the next convention in Brisbane.
Beverley Bradbery
Secretary
Posted by Steve Dalton at 7:52 PM